You are here: Home / Latest News / Palm Sunday in Egypt: carnage on a day of celebration
Search

Palm Sunday in Egypt: carnage on a day of celebration

On Palm Sunday morning a bomb ripped through the communion service at St George’s, Tanta in Egypt, killing 27 and injuring many more. Shortly afterwards by a suicide bomb detonated outside St Mark’s Cathedral in Alexandria where Pope Tawadros, the leader of the Coptic Church, had led worship. Eighteen more worshippers and four police officers died in the blast. Later in the day, SAT-7 crews visited the scenes of both attacks and on Wednesday and Thursday will broadcast a special programme in memory of all those whose lost their lives. 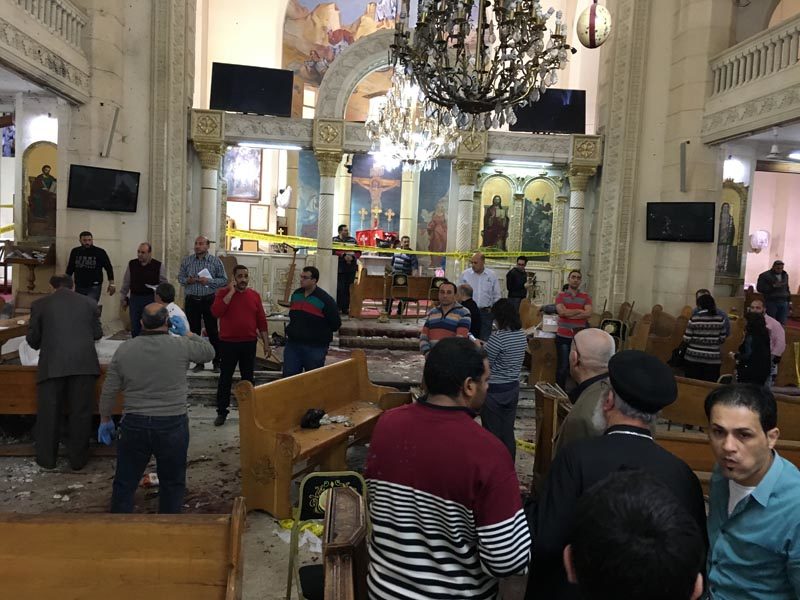 A woven palm frond used in a Palm Sunday procession lies bloodied in a church aisle; bags of shoes and other effects are gathered in polythene bags –monuments to the scores of worshippers whose lives were snatched by two horrendous bomb attacks against Palm Sunday congregations in Egypt yesterday (9 April 2017).

Since 11 December 2016 there has been an upsurge in bombings and murderous attacks designed to kill or drive out Christians:

On Palm Sunday, the security failed and a bomb detonated midway during the St George’s service. At St Mark’s Cathedral, meanwhile, the bomber was stopped by a police metal detector at the church entrance, preventing more losses within the church itself. 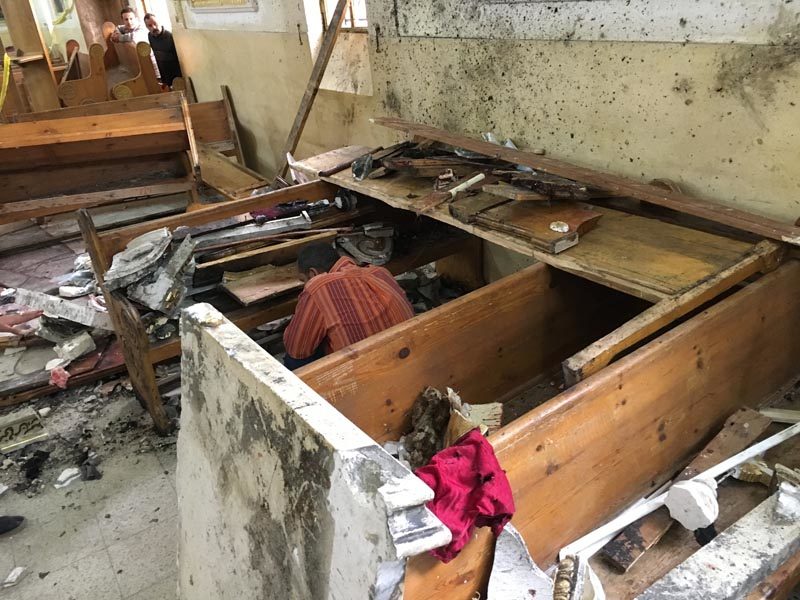 Islamic State claimed responsibility for both bombings and vowed to continue murdering Christians: “Let the crusaders and apostates know that they will pay a huge bill with their son’s blood,” read an online statement carried by the group’s semi-official Amaq news agency.

Why is such a ruthless campaign being conducted now and against Egypt’s Christian community? Although Christians are being targeted, it appears to be part of a wider strategy to destabilise and undermine the Egyptian state. Lower-level attacks against Christians – especially in rural areas which are ineffectively policed – has been an ongoing problem in Egypt. But Christians are now being selected as a soft and easily identifiable target for largescale attacks.

For the jihadists of Islamic State they are also seen as one group who have no place in their vision of a strictly Islamic society. Typically attacks designed to strike terror have taken place during major religious or national festivals. This is true of the car bombing of Al-Qeddesine Church in Alexandria as long ago as New Year 2011. Yesterday the bombers selected one of the holiest days in the Christian calendar in the knowledge that far larger numbers of worshippers – families included – would gather to mark the start of Holy Week. A further reason for the timing is probably the imminent visit of Pope Francis to Egypt from 28-29 April.

Christian satellite TV broadcaster SAT-7 has its largest production team based in Cairo and has freelance and associate producers based in other cities. During each outbreak of violence against the nation’s Christians, SAT-7 has stood alongside believers with a mixture of programmes, offering prayer, interviewing those affected as well as church and society leaders, and seeking to remind believers of God’s presence and greater purposes even in their suffering. 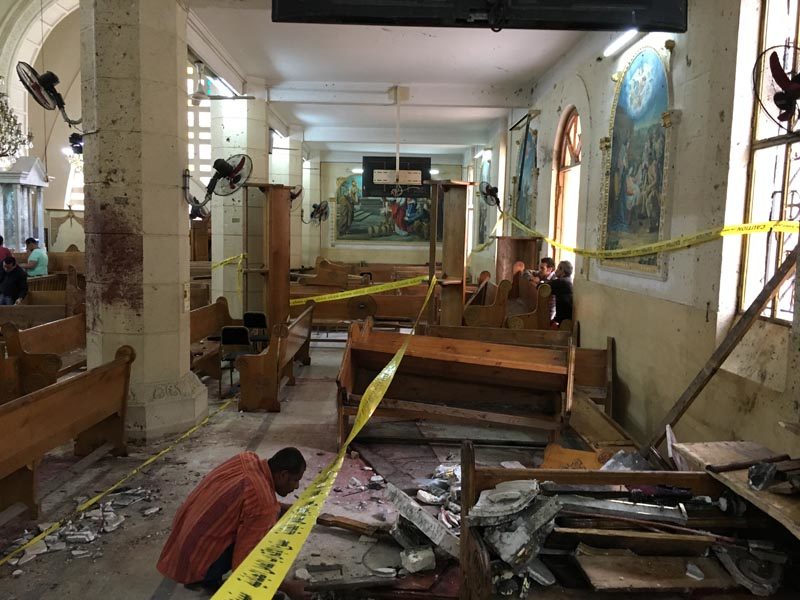 On a SAT-7 ARABIC Facebook page, the channel posted a series of messages including the following: “Our hearts are crushed with pain because of the horrifying terrorist crimes at St George Coptic Orthodox Church in Tanta and St Mark’s Cathedral in Alexandria. We lift our eyes to the living God asking for consolation to all the families of the martyrs and healing for all the injured.”

“In the midst of grief and, in many cases, immediate anger – it is sometimes hard to find the right words of comfort for those who are injured or have lost dear ones in such a tragedy.

“The truth is that, whether the tragedy be in Tanta, Alexandria, Stockholm, London, Berlin, Nice or Paris…there is nothing that anyone can do to protect themselves or others against the evil actions of anyone who is willing to give their life to indiscriminately take the lives of others. And therein is the problem – in the sick and distorted ideologies that have possessed the minds of some, to the point where the act of killing innocent children and destroying the lives of as many others as possible can be seen as a service to God.

Dr Ascott stressed that the ongoing priority for SAT-7 has to be one of changing hearts and minds:

In the end, winning the battle for people’s minds is the only way to stop such carnage. As a media organisation serving in this very troubled region, may God give us wisdom in what to say; and give our viewers the ears to hear and respond to His Love for all people – yes, even those who, at this moment, may be rejoicing at the successful murder and maiming of yet more of our brothers and sisters in Egypt.”

SAT-7 production crews visited both the Tanta and Alexandria churches yesterday and spoke with those reeling from the shocking events – just as it did in the wake of the 11 December bombing. Tonight it will broadcast a special programme giving voice to the grieving and the shocked witnesses of yesterday’s events. It will also speak with representatives of Egypt’s Orthodox, Evangelical and Catholic Christian communities to express the unity of the Church as it “weeps with those who suffer”.