You are here: Home / Latest News / Revisiting the Girl Who Forgave ISIS
Search

Revisiting the Girl Who Forgave ISIS 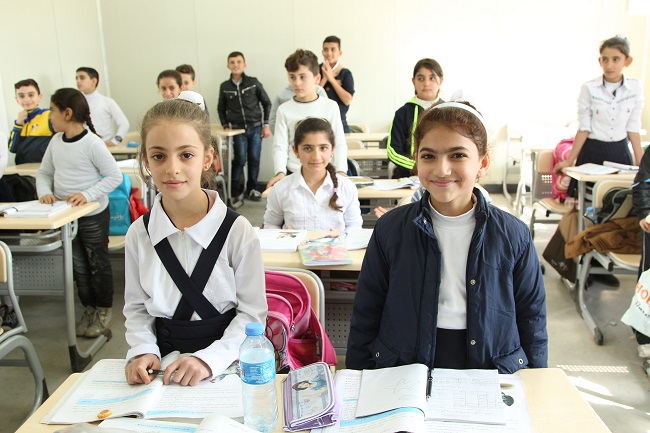 An 11-year-old Iraqi refugee whose video message of forgiveness for Islamic State (IS) went viral worldwide has given startling advice on how world leaders should respond to a Middle East in crisis: “Walk with love and mercy in your hearts.”

A year ago, Christian satellite television channel SAT-7 KIDS first filmed and aired an interview with Myriam in a Christmas special from Northern Iraq. When the station then published the clip of her interview on the Internet and social media, millions of viewers around the globe were inspired by her faith and forgiveness.

Despite losing her home, her school and her friends after ISIS drove her family out of their hometown of Qaraqosh, she said that God loves ISIS, she forgives them and prays that God forgives them too.

Living in an unfinished shopping mall structure in Erbil, she had three wishes – that she could return to school, that she could be reunited with her best friend Sandra, and that her message of love and forgiveness would reach the world.

Over 2.5 million people watched the short video  interview SAT-7 ARABIC posted on their Facebook page! It was translated into multiple languages, including Chinese, Russian, and Italian.

Today, all three prayers have been answered as she sits at the same desk as Sandra at a school in Erbil. She has a new message for the world and shared this last month when reunited with the Egyptian reporter who first interviewed her, SAT-7 KIDS presenter, Essam Nagy. When asked what message she would give world leaders, she said, “Walk with love and mercy in your hearts.”

Her friend Sandra, said, “I want to tell them to pray to Jesus because He is everything in life. He is the one who gave them life and shields them during the hard times.”

The moment when Essam arranged a surprise visit to Myriam at her new school in Erbil was captured in a special edition of the SAT-7 KIDS programme, Why is That?

“We wanted to keep connected with Myriam and her family,” Essam said. “They have become part of our lives.”

Myriam was shocked to see Essam come through her classroom door. “I can’t describe my joy,” she said. “It was so unexpected and it warmed my heart.”

Myriam’s message of forgiveness continues to touch hearts and spread further around the globe. On Friday 18 December US channel ABC News broadcast an interview with her on their 20/20 programme at 10 pm EST.

It costs £6 per minute to air a life-changing programme on SAT-7. By giving just £30 you could enable us to broadcast five minutes of a programme like Why is That? or three Baghdad Prayer Rallies for Peace (being screened live 17-19 December) to tens of thousands of  viewers in the Middle East and North Africa. Give now