You are here: Home / Uncategorised / Standing with Christians after Cairo bombing
Search

SAT-7 viewers were shocked – and some directly affected – by the bomb blast that claimed the lives of 24 Christians at worship in a church next to Cairo’s main Coptic Cathedral on Sunday morning (11 December).

This latest attack on Egypt’s Christian community eclipsed even the 2011 New Year’s Day bombing of a church in Alexandria in its number of victims. Most of those killed and the more than 40 people injured were women and children in a section of St Peter and St Paul’s Church reserved for women.

SAT-7 has an audience of 5.5 million in Egypt and has been producing special programmes to offer support and comfort to them in their grief. Within an hour of the tragedy, a SAT-7 camera crew arrived at the scene to give a voice to shocked worshippers and relatives.

SAT-7 Arabic Programming Director George Makeen explained how his fellow Egyptians are feeling in the wake of the atrocity: “People are extremely sad. They feel the insecurity and sadness. There is a lot of anger by those who have been directly affected. They ask why they are not better protected; they feel their lives do not matter. They wonder how a bag of 20kg of explosive could be taken inside a church without being found.” 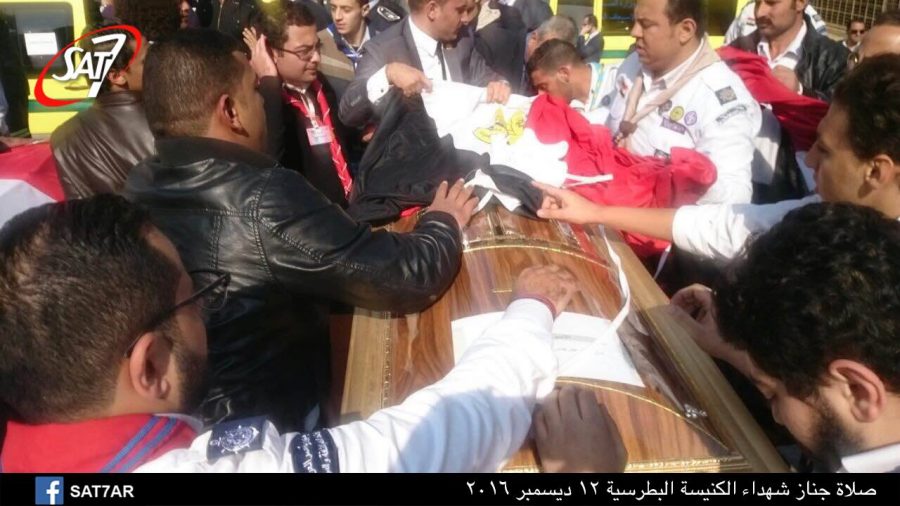 On Monday morning, SAT-7 offered a live broadcast of a packed funeral service for the victims, conducted by the Coptic Orthodox Pope, Tawadros ll. The Coptic Church leader said, “We are in so much pain over the evil that surrendered all the humanity and feelings that God entrusted in man.”

SAT-7 filmed coffins being carried from the church then draped in Egyptian flags before they were taken to a state memorial service attended by President Al-Sisi.

On Monday evening one of Egypt’s best-known preachers, Dr Maher Samuel, spoke from the Bible on the meaning of pain and how to cope with it at a service from Cairo’s Brethren meeting, broadcast live on SAT-7. A special edition of SAT-7’s flagship current affairs show Bridges then reported on events and interviewed church leaders and other commentators. Guests and presenters addressed issues such as how both to prevent terrorism and protect human rights, why terrorist movements target Christians, and the messages to convey to children so that they do not think all those of another religion are against them.

“Our main message on this episode was to speak a word of comfort that comes when people can express their human fragility, fear, grief and shock,” Makeen said. “We were concerned that always expecting people to feel God’s presence and ignore their feelings is unhealthy. In such times it is OK to be afraid, confused and even desperate. This is exactly why we need God to help us in coping with this.”

In his funeral address, Pope Tawadros stressed that it is not only Christians but the whole of Egyptian society that is threatened by terrorism. Makeen agreed: “Six soldiers were killed in Cairo at the weekend, two days before there was another attack in Sohag, Upper Egypt; two weeks ago, terrorists attacked and killed a Christian.”

However, Christians often feel more vulnerable than others and that not enough action is taken to bring those who attack them to account. “We Christians feel more threatened,” he explained. He said those who planned the bombing next to Cairo’s main Coptic cathedral chose a soft target that would allow them “to do something big that would get noticed. We are paying the price for the conflict between the government and the extremists.”

Makeen went on to identify what he believes is the root of such sectarian violence. “These attacks will continue,” he said, “unless we change the education system. Otherwise the racism (sectarianism) against minorities – Christians, Shia and others – will go on. In public schools, for example, 2,000 years of Coptic history is not mentioned. Christian students have to leave the classroom during religious lessons to go to their own class.” He sees this as a form of exclusion that immediately identifies and stigmatises the Christians and is a barrier to understanding between the communities. “No one suggests the Christian students should explain their faith so their peers can understand it; they are excluded.”