You are here: Home / Features / Turkey: The cry of isolated believers
Search

Turkey: The cry of isolated believers

These are difficult times for Christians in Turkey. The country has suffered an increase in terrorist attacks in major cities and been in an extended state of emergency following the attempted coup in July 2016. The far-reaching repercussions included mass sackings, arrests and the closure of hundreds of media outlets. The impact of the result of last month’s divisive referendum on constitutional changes to presidential powers remains to be seen.

Turkey has one of the lowest proportions of Christians per population in the world, with around 180,000 believers in a country of 77 million people. Mistrust and suspicion during recent years has also affected the Christian minority. Several foreign Christian workers have been deported, churches have faced harassment from local authorities and, in one city, all churches (Catholic, Protestant and Orthodox) have been ordered to close. In addition, churches have faced threats and attacks from radical Islamists.

SAT-7 TÜRK is answering the cry of isolated believers, giving encouragement, providing sound Christian teaching, as well as a means to access Christian fellowship and worship.

SAT-7 is frequently contacted by isolated believers and those suffering oppression. Our programmes also counter the misinformation and misconceptions about Christianity that lead to hostility towards Christians. They present the Gospel accurately and give Christians a platform from which to speak into their culture. SAT-7 offers positive views on everyday living, on family life, social issues, justice and on living peacefully together in mixed societies.

One non-Christian viewer contacted SAT-7 to say, “I began to feel anger towards God because of all the evil wars and sorrows in the world…But when I watch [SAT-7], I understood how I should think, and I recognised that God is good and evil things do not come from God. Now I have a hope inside of me, and I owe it to your channel.”

The Preachers of Anatolia gives viewers an opportunity to hear from churches in small cities and towns across the country. Church leaders are invited onto the programme to discuss different topics and share teachings from the Bible. 180 Degrees with Christ shares Turkish Christians’ testimonies in powerful 15-minute episodes. SAT-7 TÜRK has a dedicated team that travels to different locations across Turkey and the surrounding countries, meeting and interviewing Christians.

As the newest channel in the SAT-7 family, SAT-7 TÜRK is becoming increasingly visible in supporting the Christian community and presenting good news to the wider community. From 2015, it has been the only Christian channel available on Türksat, the government-owned satellite, watched by an estimated 55 million viewers within Turkey. In the summer of 2016, SAT-7 TÜRK became available on D-Smart – a digital subscription service broadcasting to 6 million people across Turkey.

SAT-7 TÜRK’s Audience Relations Manager Ümit Teymur explains, “Despite all the current problems in our country, we broadcast messages of the power and love of Jesus Christ to give the hopeless hope.” 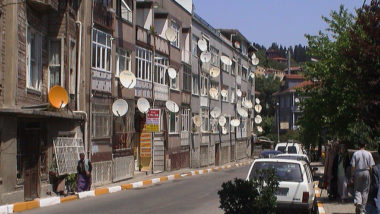 Share on TwitterShare on FacebookShare on E-mail
We use cookies to give you the best possible experience. Essential cookies speed up page loading and improve your experience. We'd also like to set optional analytics cookies to help us see how people use our site so we can improve it. We won't set optional cookies unless you choose to accept them. Using this tool will set a cookie on your device to remember your preferences. Click FIND OUT MORE to learn about how we use cookies.Accept all cookiesBlock non-essential cookiesFind out more