You are here: Home / Blogs from the Middle East / All are welcome to learn
Search

All are welcome to learn

On a recent trip to Lebanon, Katerina Parpa, a member of SAT-7’s international Communications team, visited a learning centre that uses SAT-7 ACADEMY’s educational programmes to help refugee children thrive. Here she reflects on the experience and the heart-warming moments she shared with the Syrian and Iraqi children. 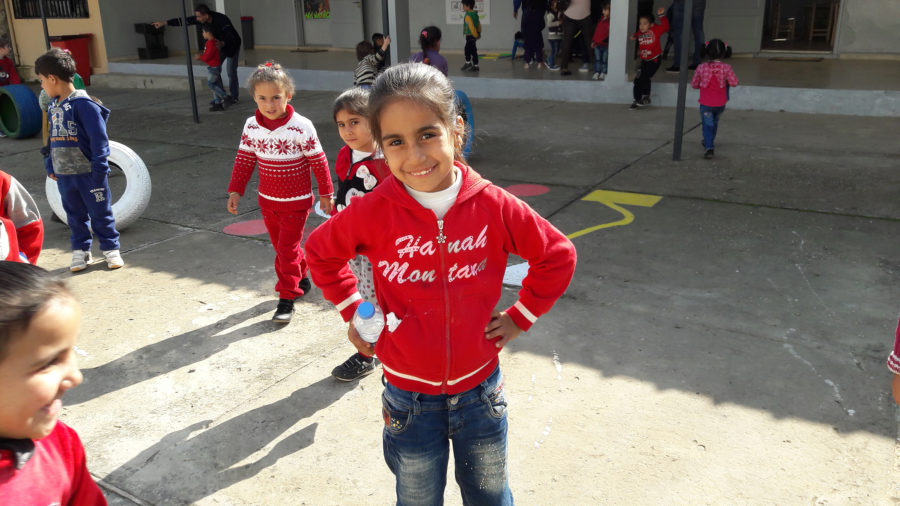 “Merhaba!” (“Hello!”) said a little Syrian girl dressed in a red hoody. I introduced myself, and the girl told me her name was Sabah. Her smile won me over instantly – I like to believe the feeling was mutual. This is one of the memories from the Cultural Heritage and Interactive Learning Development (CHILD) Centre that now fuel my everyday work at SAT-7.

We arrived right before the children’s first morning break. Although the facility had only been open for a week, everything was running smoothly. A touching moment came for my traveling companion and SAT-7’s Projects Manager, Nicoletta Michael, when she was handed the bell that calls the children to play outside. The children rushed out joyfully and began playing: some with hula-hoops, others with painted tyres and footballs.

Many of the kids were very happy and excited to see us. Sabah was the first to run up to me. A little boy, Ali, put down his green ball and came to high-five me. Ali’s head had been shaved – head lice are a common problem among refugee and displaced children.

Some children, like Sabah, were noticeably confident and sociable. Others were self-conscious and reserved. They weren’t afraid of us, but they were generally withdrawn. While other kids played together, these children sat alone, staring into the distance. I wondered what traumatic experiences they had faced, or might be facing still. I hoped that the centre’s psychosocial support, and SAT-7’s encouraging educational and developmental programs, would help them to overcome their fears and trauma. These children may not understand the long-term impact the centre will have on their lives, but they did understand our smiles, our interaction with them, and the simple gesture of a high-five.

Most of the children were between the ages of four and six. Many had blackened teeth full of cavities. Some were wearing shoes that were too small. While some children were clean and neat in appearance, others wore stained clothes and had dirty faces, perhaps due to not enough running water at home. All the kids enjoyed washing their hands alongside Nicoletta at the fountain, and I was happy to hear that the centre will be teaching them hygiene lessons and awareness and respect for their bodies.

Breaktime was over, and the children returned to their classes. When I quietly crept into the French class, one little boy saw me and came to give me a high-five. Then one by one, all the kids followed suit! They ran up to me, hugging my leg and smiling up at me, while the teacher called out “S’il vous plaît, s’il vous plaît!”, desperately trying to calm them down. All they wanted was a high-five and a hug… kids can be so happy with so little. 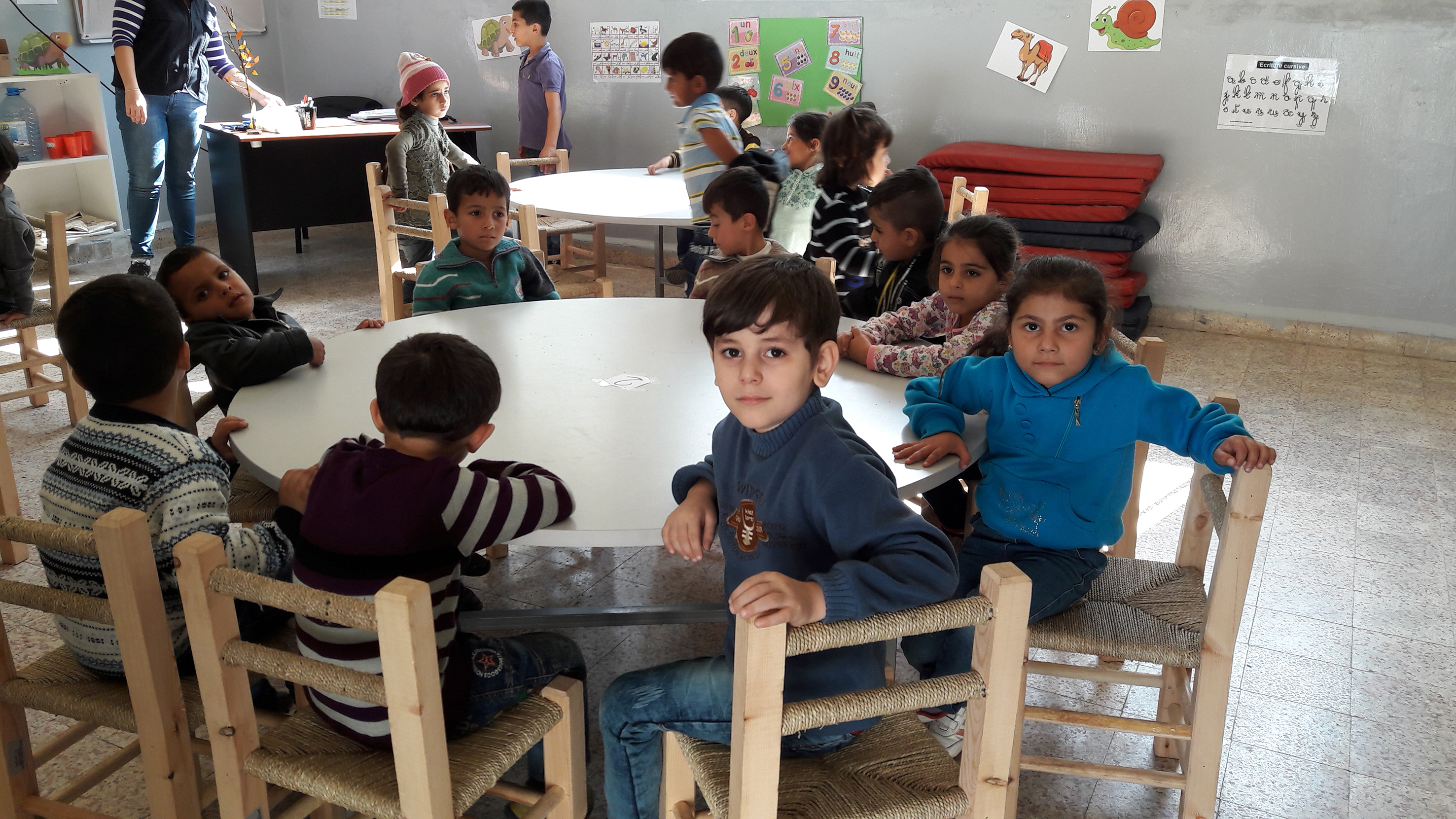 Hope for the future

We also met four mothers of children at the centre. The women are all from the same village in Syria and now live on a local farm near the centre, where their husbands work on the land. I was later informed that in some families, up to twenty people live together in a one-room shack. In the heart of the cold winter in the mountains, the women will have nothing to wear but disheveled clothes and worn-out sandals.

More of Nicoletta’s words rang in my head as we met with the mothers. “Six years ago, these families could not have imagined that they would be in such a situation,” she had reminded me. “They had other dreams for their children, but then the war came.” 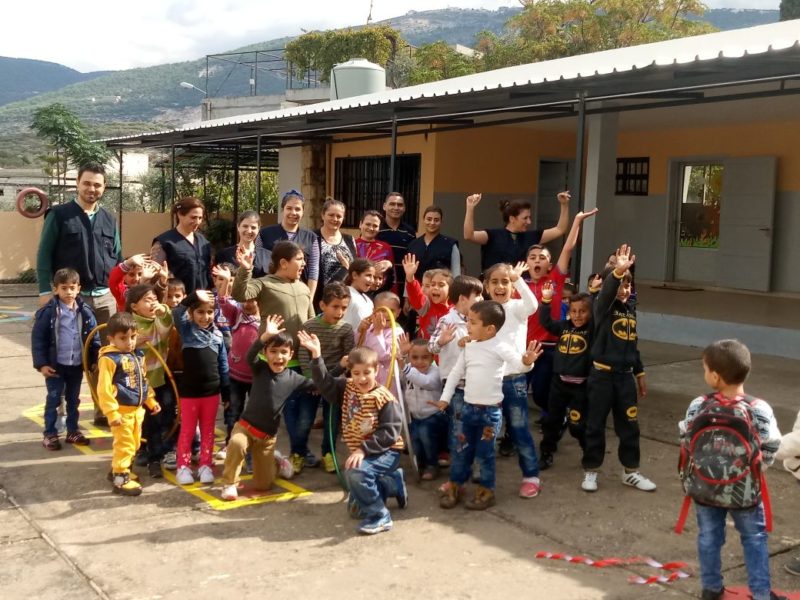 Several of the women expressed their happiness that their children can learn at the centre and said that their kids are eager to come to class. One shared that her son had been standing outside the house at five o’clock in the morning, waiting for the bus to come because he is afraid he might miss it.

Aline, the centre’s facilitator, told me about one father who could not send his daughter to school because he didn’t have money for the bus. He was so grateful to the centre for offering free transportation and education, as well as two meals a day. He couldn’t stop thanking Aline and the other staff for making his little girl so happy.

It warmed my heart to see the obvious trust that these parents have in the centre and its benefits for their children. They know that their children now have hope for a better future and that maybe, despite the upheaval and uncertainty they have endured, they will one day have faith in humanity again.

“My teacher and my hero” 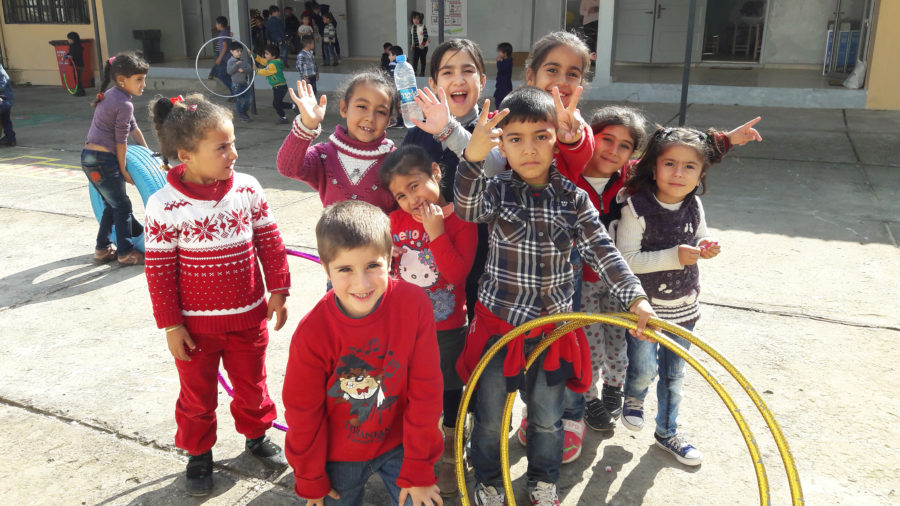 Little Sabah’s hopeful smile has been engraved into my memory. Her picture is now the wallpaper on my smartphone – a device that can cost as much as a year’s supply of clothing or healthcare for her. For the same cost, SAT-7 can provide a whole year of programming for over 300 young viewers just like Sabah.

For me, Sabah represents the millions of children who have lost their homes and fled their countries. Many are not able to attend school, or even a learning centre such as this one. She represents all those who have no access to proper health and dental care, clean clothes, or shoes that fit. And yet she smiles joyfully and welcomes new friends with open arms. She is my teacher and my hero. She reminds me to be grateful and brave, and to smile, trusting in a humanity that cares and in hope for a better future.

The Cultural Heritage and Interactive Learning Development (CHILD) Centre opened its doors in November 2017. The centre uses SAT-7 ACADEMY programmes to provide learning to 75 children who cannot access or afford traditional schools, who have been rejected from schools due to lack of space, or who have learning disabilities or additional needs created by trauma. The popular My School programme is being used to teach the children a basic curriculum of Arabic, maths, science, English, and French. Other programmes encourage emotional development and address current affairs and social issues. The facility also offers psychosocial support to the families and specialised teacher training. Read more about the CHILD Centre

The facility aims to measure the impact of SAT-7 ACADEMY’s programmes and to identify the families’ educational, psychological, and physical needs. SAT-7 hopes that more local organisations working on the ground with refugees, displaced people, and others who lack access to education will open centres that use SAT-7 ACADEMY’s multimedia educational approach. Read more about SAT-7 ACADEMY