The 1 November was a red letter day for many Syrian refugee children and families in the north Lebanon district of Zgharta. A SAT-7 partnership with local Lebanese charity, Biladi (“My Land”), saw the Cultural Heritage and Interactive Learning Development (CHILD) Centre open its doors for the first time.

The centre will use educational programmes produced by SAT-7 ACADEMY to provide learning to 75 children who cannot access local schools, or who have been turned down because of lack of places, learning disabilities or additional needs created by trauma.

Youngsters who have watched enviously as local buses ferried other children to schools in the area are thrilled that they can now learn too – as Katerina Parpa, a SAT-7 Communications Officer in our Cyprus office, discovered. Parpa visited the centre with project manager Nicoletta Michael a few weeks after it opened. Sabah, one of the 35 children who had already enrolled, welcomed them with a loud “Merhaba!” (“Hello!”) and a broad smile.

While some, like Sabah, were excited, Parpa said others were withdrawn, staring into the distance. “I wondered what traumatic experiences they had faced, or might be facing still,” Parpa said. “I hoped that the centre’s psychosocial support, and SAT-7’s encouraging educational and developmental programmes, would help them to overcome their fears and trauma.”

The centre is housed in a former kindergarten, which has been refurbished after the local municipality expressed interest in SAT-7 and Biladi’s plans to offer complimentary education to underprivileged Lebanese, Syrian and Iraqi children between 5 and 8 years old and their parents and primary caregivers.

Nicoletta Michael says the centre has two main goals. Firstly, it uses SAT-7’s popular My School programme to teach a basic curriculum of Arabic, Maths, science, English, and French, and it offers psychosocial support to the families and specialised teacher training. Secondly, the centre will measure the impact of SAT-7 ACADEMY’s programmes and will identify other educational, psychological, and physical needs for which the channel could offer support.

SAT-7 hopes that the CHILD Centre will be an example that other local organisations will want to follow and open centres of their own, using SAT-7 ACADEMY’s multimedia educational approach. 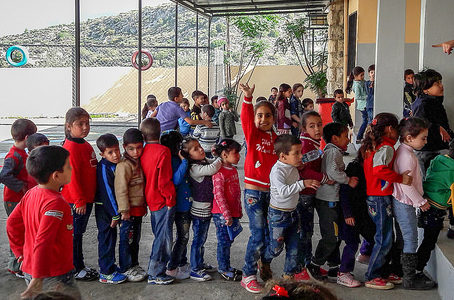