This Easter, as we remembered the death and resurrection of our Saviour, world events continued to present us with the sharp contrasts of suffering and hope – the darkness of the present moment and the promise that all things will be made new in Christ. It’s a  message that is more important than ever for the people of the Middle East.

As they celebrated Palm Sunday, two churches in Alexandria and Tanta, Egypt, were bombed by terrorists connected to so-called Islamic State (IS). Some 44 people were killed, including Muslim police officers. The attacks sent a wave of revulsion across Egypt and the wider region. What happens to the largest Christian community in the Middle East – the Copts – has implications for the whole church in the wider Arab world. The fact that IS claimed responsibility was seen as a sign of things to come: Christian believers are now being targeted outside of IS-held territories. 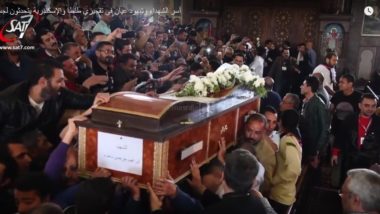 In response, Egyptian President Abdul Fattah al-Sisi declared a three-month State of Emergency and three days of national mourning, and vowed to bring the perpetrators to justice. Yet, in one sense these attacks are only an intensification of violence continually experienced by Egypt’s Copts. The Esshad website that aggregates sectarian incidents in Egypt has recorded some 498 attacks on Copts and Coptic institutions, churches, homes and businesses between July 2012 and April 2017. Despite this, there seems to be no strategic security focus to protect them or take action against statements inciting hatred against Copts made across the political spectrum. In the last year, hundreds of Coptic Christians have had to flee from their homes in Sinai and from rural villages.

The narrow result of the national referendum in Turkey last weekend is now set to bring sweeping changes to one of the region’s most powerful nations. The vote on whether to transfer executive powers from the Prime Minister and Parliament to the President is an historic one. Since the republic was founded in 1923, the Presidency has played a largely symbolic role. This had begun to change since former Prime Minister, Recep Tayyip Erdogan, became President in 2014, and accelerated after the coup attempt last summer. Since then, the President has exercised increased powers under a state of emergency, and now his goal of codifying these powers and shifting Turkey into a presidential system is being realised.

Some 51.3 per cent of Turks voted Yes to the proposed change. While legally this is a decisive victory in a binary referendum, opposition groups are arguing that there were irregularities in the vote counts, and international observers said the referendum had neither been fair nor fully free. It was also notable that, for the first time in a decade, President Erdogan or his AKP party did not win the largest vote in the country’s most populous cities of Istanbul and Ankara. Experts believe that such a narrow margin in favour of change will create an unstable period in the run-up to the November 2019 presidential elections when the constitutional changes will come into full effect.

Another standout development was the unilateral decision of the US administration to bomb an air base belonging to the Syrian military. European, NATO and US officials argued that the latest chemical attack in Syria that killed dozens of civilians was undertaken by forces loyal to and on the orders of President Assad. In an interview last week, President Assad again denied any Syrian responsibility for the attacks and went so far as to claim they were faked as a pretext for the US missile strike. Russia has already blocked a UN investigation into the attacks although samples gathered by British and other officials point to the use of deadly sarin gas.

It is not only the Syrian government, however, that is suspected of committing war crimes. More than 120 residents of two Shia towns were killed in a bomb attack during a population swap between Shia and Sunni residents of rebel- and government-held areas. Reports say some 68 of those killed were children. How the US intervention will impact this prolonged war with so many civilian casualties – and whether it will contain or fuel the violence – only time will show.

In Iran, former president Mahmoud Ahmadinejad stunned everyone with his decision to register and run for the presidential elections next month. Ayotallah Khameini, Iran’s Supreme Leader, previously “advised” him not to run in elections. This defiance of the leader adds an unusual twist to anticipations over the election race. President Rouhani will run again and is expected to keep his seat, though he does face challenges.

Actions taken by the US administration on Iran and the nuclear deal negotiated by President Obama could also have an important effect on the outcome. A harsher posture towards Iran would strengthen hardliners and undermine Rouhani, who is still seen as someone the West can work with. Nevertheless, while Iran is enjoying the easing of sanctions and is currently buying dozens of Boeing passenger jets, its treatment of Christians has not improved. This month, a Christian convert, Ebrahim Firouzi, was given a five-year prison sentence on accusations of disrupting national security by his Christian activities.

Continue to pray for Sudan and Yemen. Both countries not only face dire famine and food shortages impacting millions, but the violence and political instability continues. In fact, the UK government has raised alarm bells by claiming that a genocide is being perpetrated in South Sudan along tribal lines. The UK International Development Secretary, Priti Patel, in Sudan this month commented that the situation is “absolutely abhorrent and inhumane”. A UN report last month warned of the country’s descent into tribal war and ethnic cleansing. Things are no better for Christians living in the North where the Khartoum government continues its efforts to seize Christian churches and properties. This month, Middle East Concern reported that Younan Abdullah, an elder of an Evangelical church in Omdurman, was killed in a mob attack after Christians protested against the takeover of their school by a local businessman.

Amidst so much dark news, there were small rays of hope. In a special Easter interview, President Michel Aoun of Lebanon, told SAT-7 he aims to position the country as an international hub for religious dialogue, hoping for confirmation or “blessing” from the United Nations as he does so. He added, “Lebanon encompasses the ultimate mix of cultural, religious, and ethnic groups in the world.”

In Iraq, Patriarch Louis Sako, the most senior bishop of the Chaldean Catholic Church, joined a symbolic peace march from Erbil, Iraqi Kurdistan, to Alqosh in the Nineveh Plain. A hundred people took part in the 100-mile pilgrimage between Palm Sunday and Maundy Thursday, walking through “ghost towns” cleansed of IS control. Organisers said the march was intended to bear witness to the hope of rebirth of the cities and towns of the Nineveh Plain. On Easter Day, hundreds of Chaldean Christians celebrated the resurrection in St George’s church in Tel Esqof, north of Mosul. Unlike many others, the town sustained limited damage because IS were dislodged early in the fighting by Kurdish forces. At least 350 families have returned to Tel Esqof since December.

Reuters agency spoke to 75-year-old Christian Kyriacos Isho, who attended the service with his 12 children and grandchildren. He said: “God willing, the celebration of the resurrection of Christ will also mark the return and rising of the Christians in Iraq.” No matter how bleak the present, Middle East believers like Isho, hold firm to the Easter promise of resurrection and restoration in Christ.