MEN AND WOMEN UNITE FOR CHANGE IN IRAN

SAT-7 OFFERS PRAYERS AND SUPPORT FOR VIEWERS IN IRAN

As protests across Iran intensify, SAT-7’s Persian channel is offering prayer and support to viewers inside the country.   SAT-7 PARS is continuing to receive messages from viewers in Iran despite the internet blocks and restrictions on social media sites.  “Please keep Iran in your prayers. We remain hopeful that Iran will be free,” wrote Meersa as the protests intensified across […]

The death of Her Majesty Queen Elizabeth ll led the news in many Middle East states last weekend and prompted messages of condolence from national leaders. Jordan and Lebanon respectively declared seven and three days of mourning. The patriarch of Egypt’s Coptic Orthodox Christians, Pope Tawadros ll, led Christian tributes when he said he was “personally thankful for the interaction […]

Soaring prices for staples are hurting the most vulnerable families and communities around the world, including in Egypt. To help us focus our prayers on those who are struggling, including our Christian brothers and sisters, SAT-7 Egypt Communications Officer Mary Joseph shares the impact she sees around her. Millions of poorer Egyptians who rely on the country’s round, brown flatbread […]

FOR CHRISTIAN YOUTH, A CHANCE TO BE HEARD 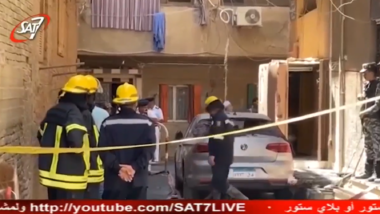 One week after a fire destroyed a church in a densely populated area of Cairo, Egypt, church and family members have paid tribute to the victims on SAT-7. Two programmes addressed the tragedy that shocked citizens across Egypt. Fire took hold at the Abu Sefein church in Imbaba, Giza, in greater Cairo during a morning mass on the 14 August. […]

Afghanistan: “God is our only hope”